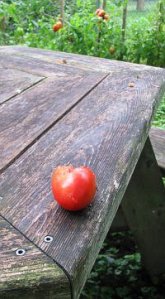 It’s time to reactivate this unblog, as it’s laid dormant through most of the summer. This is one fine way to begin a day away from the office.

When I spied this tomato today, Dy commented that it’s not the first. The other day she thought Tee had left one on the table while picking. Dy brought it in, with only a small peck mark on it. Half an hour later, there was another one in it’s place – probably this roma, now about half consumed. We suspect squirrels, though none have an Italian accent we can detect.

None of us has the patience to watch for the culprit(s). The theory is that if we leave it there none of the others will be touched. We’ll see. At least until the table gets flipped for staining underneath.

The Schlossers of Cedarville may recognize this six-sided cedar picnic table. Normally it sits on our deck, but was moved deeper into the backyard this spring for the deck’s replacement. It stayed there through the deck’s staining (at two months, counter to conventional wisdom) and awaits a coat of its own once it dries out.

Woo-hoo! Black raspberries galore along the local park’s trail. If others have picked since we did last, it didn’t show. I was grateful for A.J.’s help and told him so; he decided he didn’t really need my help. To the tune of “Oh, Susanna”:

“My Dad, he is a good helper…
A little big around! [A.J.’s contributed line]
He helps me pick the berries
Wherever they are found.”

We went this time earlier in the morning – but not too early – and with long sleeves and pants. For facing the hazards of ticks, poison ivy, stray yellow jackets, thirst and hunger, we were rewarded with about five cups.

A.J. offered a lady walking the trail a handful of berries (not all ripe), which were gladly accepted. When I did the same a moment later from the other side and down a ways, she took a few more and traded a couple of the wild turkey feathers she’d found. Said that turkeys are meant to remind us to share our blessings. (Because of the first Thanksgiving?) We were generous knowing it’s God’s bounty far excelling what we could manage to grow in our yard – and this on public property.

I should have been doing my chore instead of writing, as the family’s back from the library and primed for some raspberry pankakes. Mmmmm…

12:35 PM Something was telling me it was about time for lunch. The “honey-do” list is part way done. Somehow those tasks take 50% longer than I anticipate, adding up to a full – if late-starting – morning.

The late start was the result of sleeping in just past eight, a rare experience in the household. Truth be told, I woke earlier and shut windows and a door and turn on a fan to screen noises from beyond the house. The crows are the most obnoxious, caw-caw-caw-cawing from perches conveniently located near bedroom windows. Alright, the fan was mostly to add noise, since the sound machine is with the kids and Dy in Illinois. They’re visiting friends and family for a long weekend – thus the relative quiet.

I mentioned last Saturday the hedge we took down the previous Saturday – just in time for the city brush haulers to show up and tote it away with neighbors’ storm debris. It had screened the front porch steps as they angle down to the driveway, and even more thoroughly the longer we neglected it, knowing it would come down. If I get brave, I’ll post a few pictures of the hedge as it went. It’s getting embarrassing not having photos on the unblog just because I couldn’t make it work the first time I tried; if one’s determined to try to buck a trend, it should at least be intentional.

Now the little stumps have holes drilled down into their centers, with a dose of rot accelerator funneled in and dissolved in hot water. The former owners left a large stump in the back yard (along with the wood beneath the deck, which will take some splitting) and we’ve made a few more by taking down extra bushes in and around the garden and raspberry patch. It took every spare extension cord in the house on the end of our long heavy-duty one to reach all the way across the yard, but I got the ones back there drilled, powdered and watered.

Drilling the second of eight or so holes in the big stump, I noticed two mosquitoes biting different arms. They didn’t survive, but neither did the crow A.J. and friends discovered sick on the ground near the raspberries a month ago. A single black feather remains as witness to its death throes, probably succumbing to West Nile virus according to the city animal control officer who came by at Dy’s request to dispose of it. Not much risk except to infants, the elderly and those with compromised immune systems.

Not wishing to carry unnecessary pests in my blood, I put down the drill for a few minutes to spray and slather on the insect repellant all over. “Makes you invisible to bugs,” it claims, and it seemed to do fine. The mosquitoes attacked my shirt instead.

Also discovered in the back yard evidence of partially completed work by utility contractors on the electric pole’s cable anchor, insulator bar and grounding rod – along with one guy’s long-sleeve shirt. Not surprised it got hung up and forgotten; it’s where they’ll find it if they come back. Wonder if their work has anything to do with the fluorescent orange spray paint that appeared a couple weeks ago on grass, groundcover and mulch around that pole. Between the pole and the anchor, I reinforced the oregano’s warning stick with others in hopes it won’t be stepped on again.

Three roma tomatoes were ripe enough to pick, plus a handful of “Tommy Toes” as my grandfather called cherry tomatoes. Some of the previously picked batch will be good on a salad…

How about that lunch? – j

Not-too-random by-products of a long American Midwest tour – responsibilities, campuses and friendships toward the final expression of ultimate reality. more…

My Tweets
Back to top